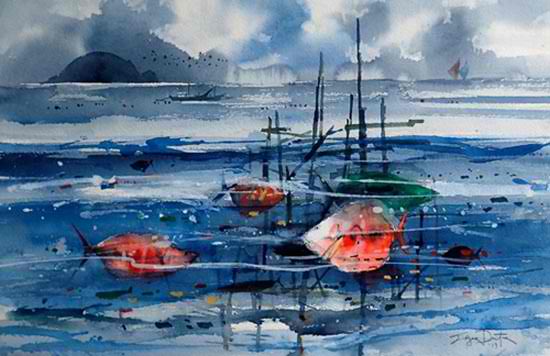 As one of the most respected Filipino artists, Edgar Doctor’s interest in painting started way back when he was still a kid in the province that had yet no art school. Back in Calabang a, Camarines Sur, the young artist was already even making his own toys, drawings and collages.

During his college days as a student of Fine Arts at the University of Sto. Tomas, Doctor was no stranger to recognition as he had already bagged awards in the national sphere-- notably for the awards for his works “Grazing Carabaos” (3rd Prize, 1960) and “Rizal Monument” (1st, 1964) at the National Student Art Competition. Now, over fifty years down the road, Edgar Doctor continues to create waves in the art scene with his masterpieces. Though widely known for his Watercolor, he is also known for his oil, mixed media and sculptural work as well. There is no wonder why he continues to exhibit around the Philippines and even internationally. He was even listed in the 2000 Outstanding Artists and Designers of the 20th Century, published by the International Biographical Centre in Cambridge, England.

“All I can say is that doing an artwork is not about its difficulty, but creating an artwork lies in the artist’s enjoyment and satisfaction while creating a piece. Para kang nanliligaw (It’s like wooing a woman). When you do it in haste, there is no glory in it. So, paghirapan mo, ’yun ang masarap (You work hard for it — that is what feels good),” Mr. Doctor said.

Charlie’s Art Gallery is pleased and honored to invite you to this esteemed artist’s exhibition here in Bacolod. The opening and artist’s reception will be held at Italia Restaurant at 5pm on August 14, 2019. The exhibition will run until September 14, 2019.