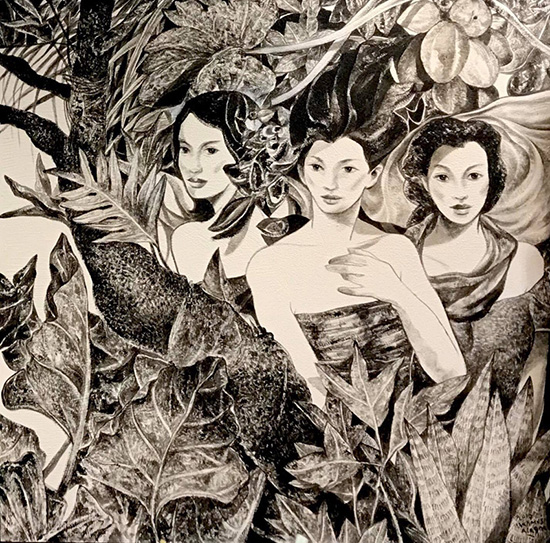 Hermes Alegre is a multi-awarded painter known for his interpretation of organic elements on canvas inspired by natural sights and a deep understanding and appreciation for women. A native of Daet, Camarines Norte, his career as an artist spans over 25 years, producing a prolific body of work that range from the figurative to the abstract, with an abundance of colors and zestful energy that is distinctly his own.

Among his most famous works are those depicting the Filipina emerging from lush backgrounds of flora and fauna, as if she is a force of nature by herself. Alegre has been surrounded and inspired by great women all his life, such as his wife, fellow artist Helena, who serves as his muse from time to time. He wields oil and canvas to pay tribute to women and their contributions to life and society.

The artist likewise explores Filipino rural scenery with his panoramic paintings of green horizons laid on a small canvas, as if taking a snapshot of a fleeting moment in time.

Hermes has forayed into abstract painting as well, proving his versatility as an artist. Whereas his figurative works run a gamut of colors, his abstract works are dominated by muted colors that come to life in bold strokes, drips and splashes that give vague impressions of provocation and sensuality, echoing his paintings of women.

Helena Alegre is a visual artist that is making waves locally and abroad for fusing art, fashion, the sciences, traditional craftsmanship, and Filipino heritage and culture in the creation of stunning sculptural jewelry.

Drawing inspiration from the arts and sciences while learning the tradition of silversmithing in her adoptive home of Camarines Norte, Helena decided to embark on a life-long project that redefines jewelry as mere trinkets and bodily ornaments, elevating them into meticulously crafted masterpieces that challenge modern and mass-produced jewelry and blurs the boundaries between fashion and art.

An alumni of Philippine Women's University, Helena is the wife of distinguished artist Hermes Alegre. She remains committed to her artistic endeavours in the midst of her family duties, leading her to dabble in theater and flamenco, as well as becoming a member of the Bayanihan Philippine National Dance Company. The artist is an avid painter as well, creating still life and landscape pieces informed by her surroundings in Camarines Norte. She has also done illustrations for children's books.

With her interest in historical and cultural artifacts, Helena has amassed a collection of antique beads and stones from which sparked a desire to create her own jewelry. Her study of various jewelry techniques was further developed when a vacation in Bicol made her learn silver smithing under the tutelage of a panday, or a smith that specializes in handling metal. She sets a number of semi-precious stones such as agate, moonstone, black tourmaline, lapis lazuli, and turquoise on ornate filigree work, creating wearable art that can be passed on from generation to generation.

Charlie's Art Gallery is honored to present Hermosa II, a two-man exhibit with new works by Hermes Alegre and Helena Alegre. The show opens at 5 P.M. on December 12 at Italia Restaurant, Bacolod City.