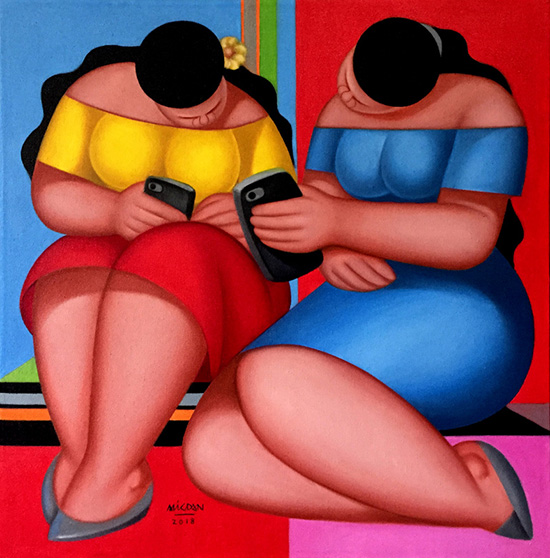 Joie de vivre (French pronunciation: [ʒwa də vivʁ], joy of living) is a French phrase often used in English to express a cheerful enjoyment of life; an exultation of spirit. It "can be a joy of conversation, joy of eating, joy of anything one might do." Such joy is evident in the works of Wilfredo Alicdan.

Coming to Bacolod for the first time at Charlie's Art Gallery, the works of Wilfredo Alicdan enlighten and inspire. Alicdan's serene figures sit, stand and pose for the canvas, charmingly unassuming, effectively baring their scene to the observer. The bold shapes and solid backgrounds draw the viewers eye away from nitpicking at the details and instead towards the appreciation of form and composition of each of his works.

Among his works, one should take the time look around the canvas. Aside from figures, Alicdan inserts little plays of whimsy here and there that suggest a depth of thought in the artist's works. The overly rotund shapes are cast in the outline of Alicdan's intriguing scenes: a couple motorcycling in space, a family literally placing their home on the map.

Yet the simple still thrive on the artist's paints: warm family figures dining on a picnic, love for a mother and child, even images of lovers either separated by walls or just playfully in love. The beauty of Alicdan's works lie in their ability to show a true side of human emotion.

Born in Dasmarinas Cavite, the talented Alicdan has been exhibited around the world with his works being shown in Singapore, Malaysia, India and the United States. He is also a founding member of the Anting-Anting group of artists and has been awarded the Emilio Aguinaldo Outstanding Award for Fine Arts.