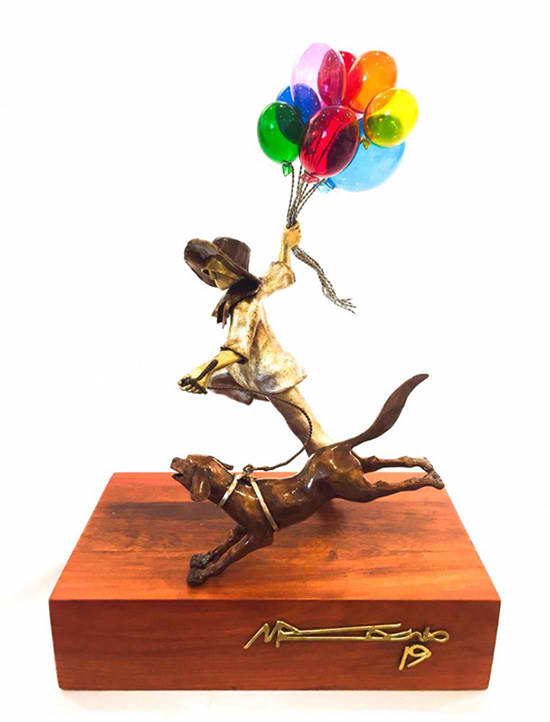 The triumph of raising up your first kite blowing freely in the wind , a boy frolicking with his dog, a mother swinging around her child,. these are but a few of the treasured memories the art of Michael Cacnio captures. The forms of welded brass glimmer the joys of life. So much so that one can not help but pause when contemplating the artist’s work. Amid the glitz and glam that this life offers, Cacnio’s treasures are not the jewels, not the money nor the fame, but his are of those that last a lifetime.

Michael Cacnio’s almost thirty years as an artist are evidenced by his mastery of the medium. His scenes are the everyday moments made into magic: A young girl, grasping a handful of balloons, becomes the image of a child dreaming large. He gives mere brass the space, the form and the substance to turn a man flying a kite into the essence of human bliss. His sculptures even border on the whimsical; where men grasp at balloons, taking them away into space; where money flows from faucets and grows on trees. Even the humble fisherman’s reality is elevated in the eyes of the artist- where the daily routine of fishing has turned into a triumph of soul and spirit.

Cacnio has been described as a social realist. While the genre is often littered with scenes decrepit and agonizing,, Cacnio breaks trend. He decides that there are realities of joy, laughter, and love. In his sculptures, these day-to-day memories outshine the macabre and misery and show that in this life, these are the things we’ll truly treasure.

Michael Cacnio has won a slew of awards – including being a Ten Outstanding Young Men (TOYM) awardee in 2006. Having had exhibits in Brussels, New York, Philadelphia, Singapore, Japan and many other countries across Asia and Europe, the artist returns for his second solo show in Bacolod City.

Charlie’s Art Gallery is honoured to present, Treasures by Michael Cacnio. The artist’s reception is on October 12, 2019 and the exhibit runs for a monthat Italia Restaurant Bacolod.